Landlords to be banned from letting draughtiest homes

New energy efficiency regulations could help around a million tenants who are currently paying £1,000 more than average on their energy bills. 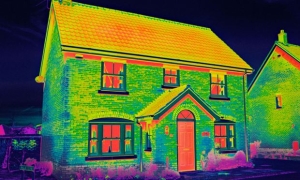 Landlords will be banned from renting out England and Wales’ draughtiest homes from 2018 in a bid to cut energy bills and carbon emissions. The new regulations are expected to help around a million tenants who are paying as much as £1,000 a year more than the average annual bill of £1,265 because of poorly insulated homes.

Campaigners hailed the move as potentially the most significant piece of legislation in a generation aimed at improving building stock in England and Wales, which is some of the oldest and leakiest in Europe.

Ed Davey, the energy and climate secretary, will present the regulations in parliament on Thursday. They will force landlords to upgrade the energy efficiency of hundreds of thousands of homes currently rated F and G to a minimum of E by 1 April 2018 – or face being unable to let them until they improve the rating. Almost 10% of England and Wales’ 4.2m privately rented homes currently fall below the E rating.

The regulations also mean that from 1 April 2016, tenants living in F- and G-rated homes will be able to request improvements such as more insulation. The landlord will then be legally bound to bring the home up to an E-rating.

“This is a very big measure. Effectively, we’re saying, if you do not improve your property up to the minimum of EPC

[Energy Performance Certificate] E rating by three years’ time, you will not be able to let out that property. Which is quite a big stick, and it’s about time too. It’s really going to make a massive difference between now and the end of the decade,” Davey told the Guardian. “We’re talking about the deepest fuel poverty, and we’re going after it hard, because it’s frankly unacceptable in this day and age.”

Davey said he wished the regulations had been brought in earlier – the proposal dates back to 2010 – but battles within the coalition had delayed it. “Not everyone in this government wants more regulation. But in energy efficiency, regulations play a crucial role.”

While Davey would not put an estimate on the overall cost to landlords for bringing 400,000 homes up to scratch, he said an impact assessment would be published and that there were a range of support mechanisms such as the green deal and ECO schemes that could alleviate upfront costs for landlords.

If a tenant requests a more efficient home and a landlord fails to comply, the landlord could ultimately be forced to pay a penalty notice. Landlords will be able to let out F- and G-rated properties beyond 1 April 2018 for the remainder of existing rental contracts, but will not be able to renew a contract or let the property to someone else until it is brought up to an E rating.

John Alker, acting CEO of the UK Green Building Council, said: “This could be the single most significant piece of legislation to affect our existing building stock in a generation, affecting a huge swath of rented properties. Government deserves huge credit for sticking to its guns. Some will undoubtedly cry ‘red tape’, but good landlords and forward-thinking property companies have nothing to fear.”

Richard Lambert, CEO of the National Landlords Association, welcomed the regulations. “The government has struck a delicate balance between making clear what is expected and ensuring that there is a realistic prospect of landlords being able to comply. Setting the standard at a sensible rather than aspirational level, allowing time to achieve it, and granting exemptions if the necessary improvements cannot be funded through the green deal or other government subsidies mean that these new regulations will not impose an unreasonable burden.”

Sophie Neuburg, energy campaigner at Friends of the Earth, said the regulations needed strengthening: “With a government so deeply opposed to new regulation, the introduction of minimum standards is a step forward for tenants forced to live in heat-leaking homes. However, these regulations do not go nearly far enough and must be significantly strengthened in future to ensure struggling households are properly protected from poorly-insulated poor-quality housing.”

Separately, an analysis published this week by the Association for the Conservation of Energy concluded that the number of UK-wide energy efficiency measures installed this winter are on track to be 80% lower than those installed in the winter of 2011/12. In 2013, the government scrapped previous energy efficiency support schemes and introduced the green deal, which MPs have condemned as a failure.

In a letter published last weekend, the CEO of the Federation of Master Builders, the director of the charity Age UK, the vice-president of NUS and dozens of other organisations called on party leaders to make a commitment in their election manifestos to spend more on energy efficiency improvements. “High energy bills are causing suffering for millions of families across Britain, especially those on low incomes. Britain has some of the least energy-efficient homes in Europe,” they said.